Please see her profile at Petfinder.org!

We will be near the food trucks at Eola Dr and Robinson.

Our two special needs dogs are quite inseparable. Anyone looking for a pair??

Cross your fingers it doesn’t rain!!

All proceeds are going toward Sugar’s vet bills. 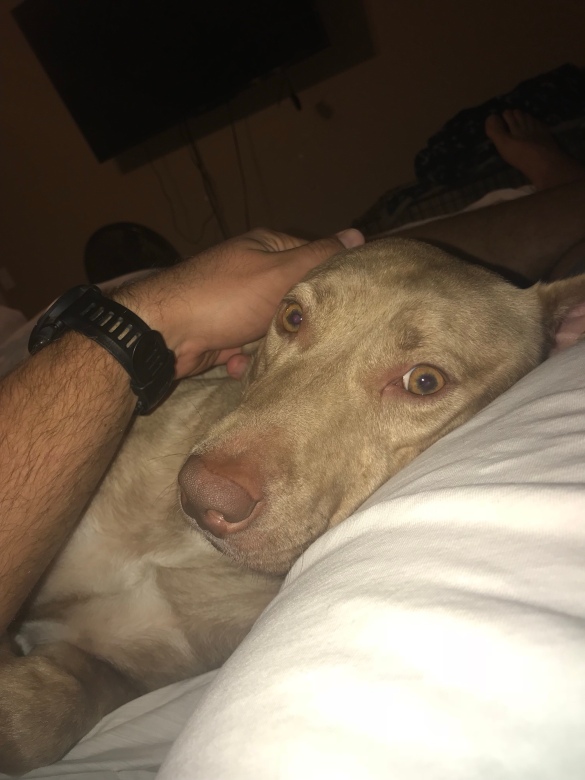 This girl is a mess.

We have been waiting to post any more news about Sugar until we knew something specific. Several specialist visits, X-rays, ultrasounds, blood and urine tests later we STILL do not have a definitive answer on what is wrong with this sweet girl. If you’ve read our previous post then you know she has been urinating spontaneously with blood mixed into the urine. This has been going on for months and we have ruled out a few things. She does not have a UTI or Lepto. She does not have…..oh wait that’s about it. $2000 later and the specialists at AVS cannot definitively tell us a whole lot more than that.

As you can imagine if we have spent over $2000 to get the likelihood of fixing everything wrong with Sugar is very slim. I asked the vet and after beating around the bush she said that Sugar will never be a completely healthy dog. Right now she has no clue that anything is wrong with her. She has a healthy appetite and is very very active. She is able to go on daily runs (Vet approved) and is enjoying her life as a normal dog at the present.

We are most likely going to try and do the two smaller tests that were recommended. Unfortunately, we have spent the majority of the money we had to get this far. We are having another Rummage Sale for Sugar in a few weeks.

Please also consider donating!!!! If you click on the Donate Now link you can set up a monthly recurring charge of any amount you choose. This could be the cost of one Starbucks Latte a month and it would help!

We’ve had Sugar for about a month and she is finally making her Saving Cyrus debut. She came to us through a friend who acknowledged that he could no longer care for her with her current ‘habits’. He told us that she was prone to peeing in his apartment and no amount of training was helping. He took her to the vet and they treated her with antibiotics twice for a UTI, but nothing helped. We agreed to take her thinking that if it was training, it would be an easy fix for us since most of our house is tile. However, we had the sneaking suspicion that there was something more going on.

Shortly after getting Sugar to our house we noticed that she had blood in her urine. We quickly go her to the vet and she was diagnosed with a “raging” UTI she was sent home with two different types of antibiotics. Two weeks later we went back in for a check up and she still had a UTI, she would need another two weeks of antibiotics. Dr Connely at Longwood Veterinary Clinic also told us that she wanted to do the routine blood work since it looks like she had a pattern of UTIs as well as do a skin scrape for a persistent hotspot. Well, turns out her blood work showed elevated Kidney values (something something was high). The vet then decided to do x-rays and had a difficult time locating one of her Kidneys. They had to pull out an ultrasound and finally found it. It turns out that she has an abnormally shaped Kidney. The hotspot test also showed that she had demodectic mange. With all of these problems combined, they told us unfortunately it is pointing toward some serious conditions.

The Vet suspects that Sugar has some degree of Kidney disease along with a possible ectopic uterer. My understanding of the later is that the tube from the Kidney bypasses the bladder all together and goes straight to her vulva instead. However, LVC isn’t quite equipped to deal with this serious of a condition. Dr. Connely suggested that we set an initial appointment with an Internal Specialist with AVS.

If you have dogs in this area, I bet some of you know that if you go to AVS, you are most likely dropping $2000-$3000 just to find a diagnosis. With that being said, we are going to try and host some major fundraisers soon. We are going to need a lot of financial help with Sugar to figure out exactly what’s going on with her. If it is even treatable I’m sure it’s going to cost a small fortune. We have yet to schedule a visit with the Internal Specialist, but plan to do so this upcoming week. From there we will post any estimates they give us.

Please share to help us help Sugar. Any amount is greatly appreciated. 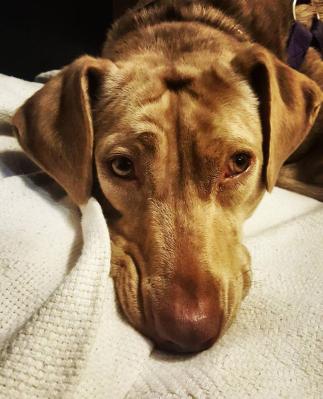