Our two special needs dogs are quite inseparable. Anyone looking for a pair?? 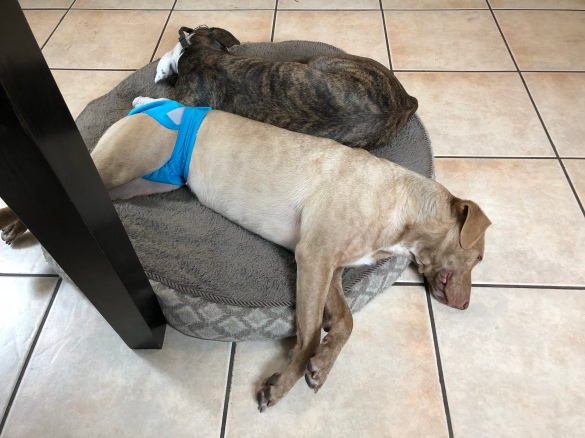 Check out this tired boy. 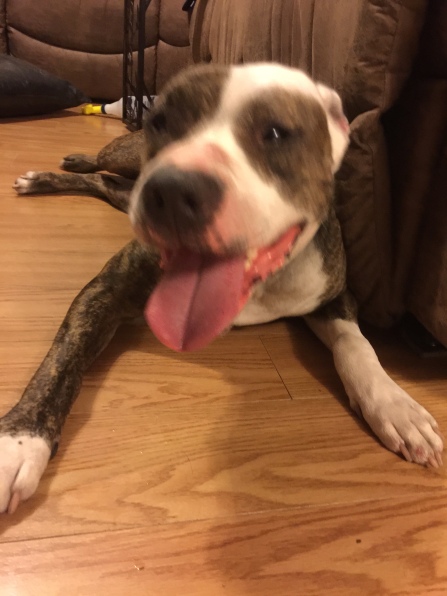 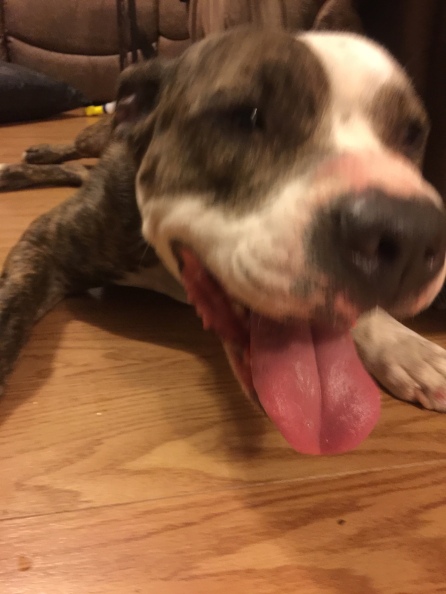 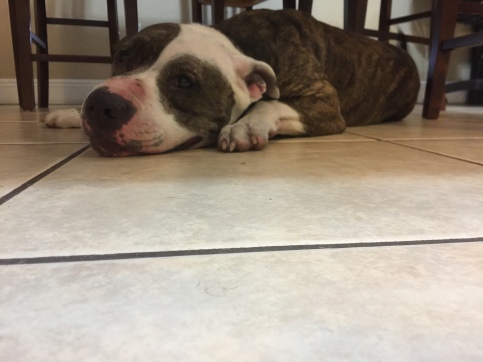 The pictures aren’t great, but this is after our morning run. He runs beside me as I ride my bicycle because there would be no other way to keep up with him. I had to cut the run shorter than normal because I had less available time this morning, but with my handy dandy activity tracker it showed we reached a maximum of 16mph. He can easily do 10 miles in appropriate temperatures. Need a running partner???

Bear has been waiting for his forever home for 13 months.

A little about Bear
Bear is a rambunctious young dog who LOVES to play and be around people. He is a very active dog with endless energy who would be a perfect fit for an active couple. This boy will play hide and seek with you all day if he could. Bear also has a more mellow side and is happiest when he is with his people. One of his favorite activities is to snuggle and give as may kisses as you can handle. He would do best in a home without any children or animals.

Can you believe that this adorable face has been with us for nearly 10 months?!?!? 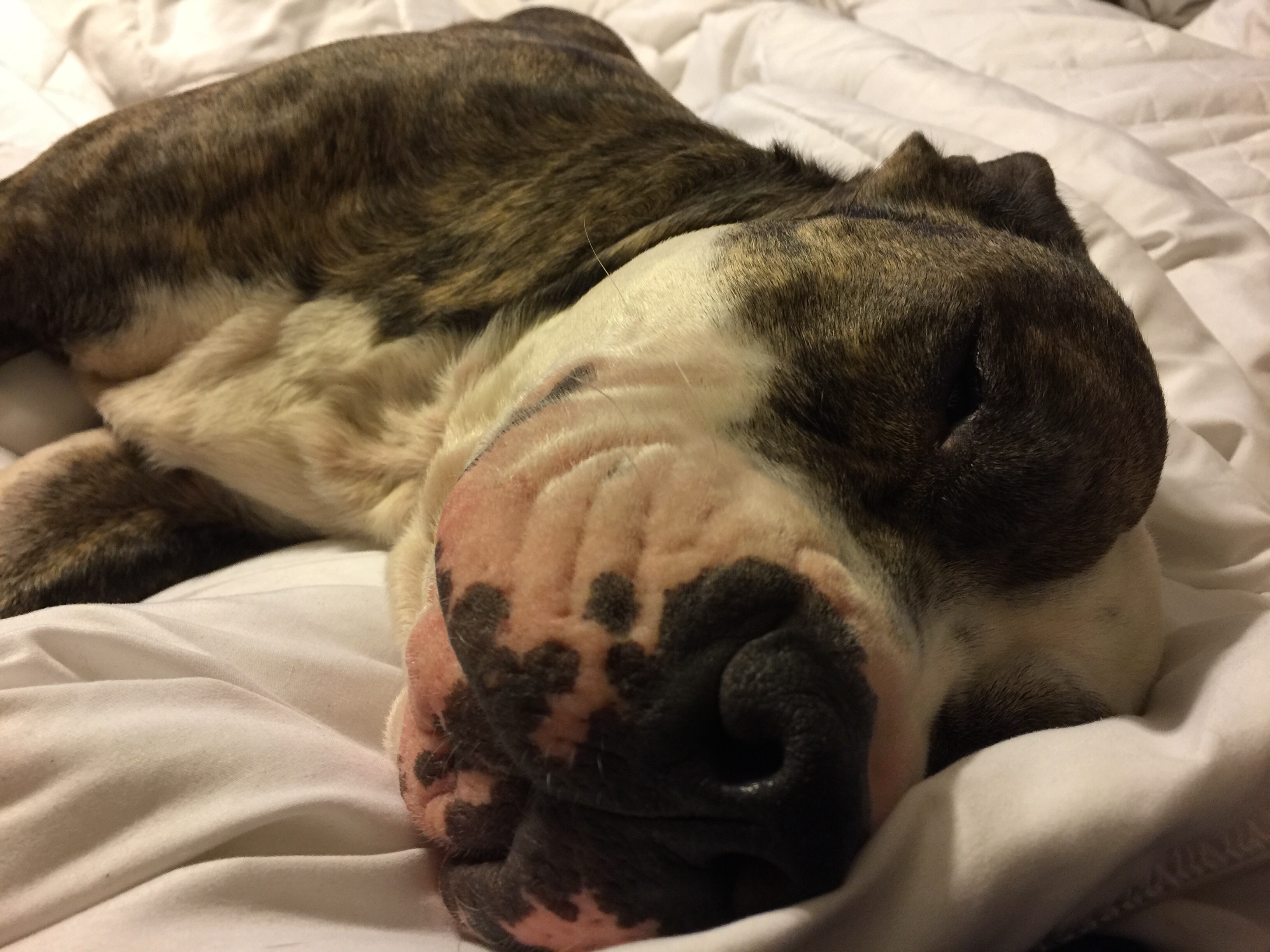 We got Bear from Orange County Animal Services in February this year. He was on the euthanasia list due to overcrowding and was the only one in his group to get a 24 hour extension. This boy came to us heart worm and energy positive. It was a difficult few months keeping his energy down while he was receiving treatment. One neuter and a lot of lonely nights later this crinkle face mutt is now out with all our personal dogs and is still looking for his forever home.

We have been working with Bear on his lack of social skills (shh don’t tell him I said that) and he’s been making a lot of improvement. We recently had a Saving Cyrus alum returned to us and Bear was not too happy about him being in our house. This is three weeks later. 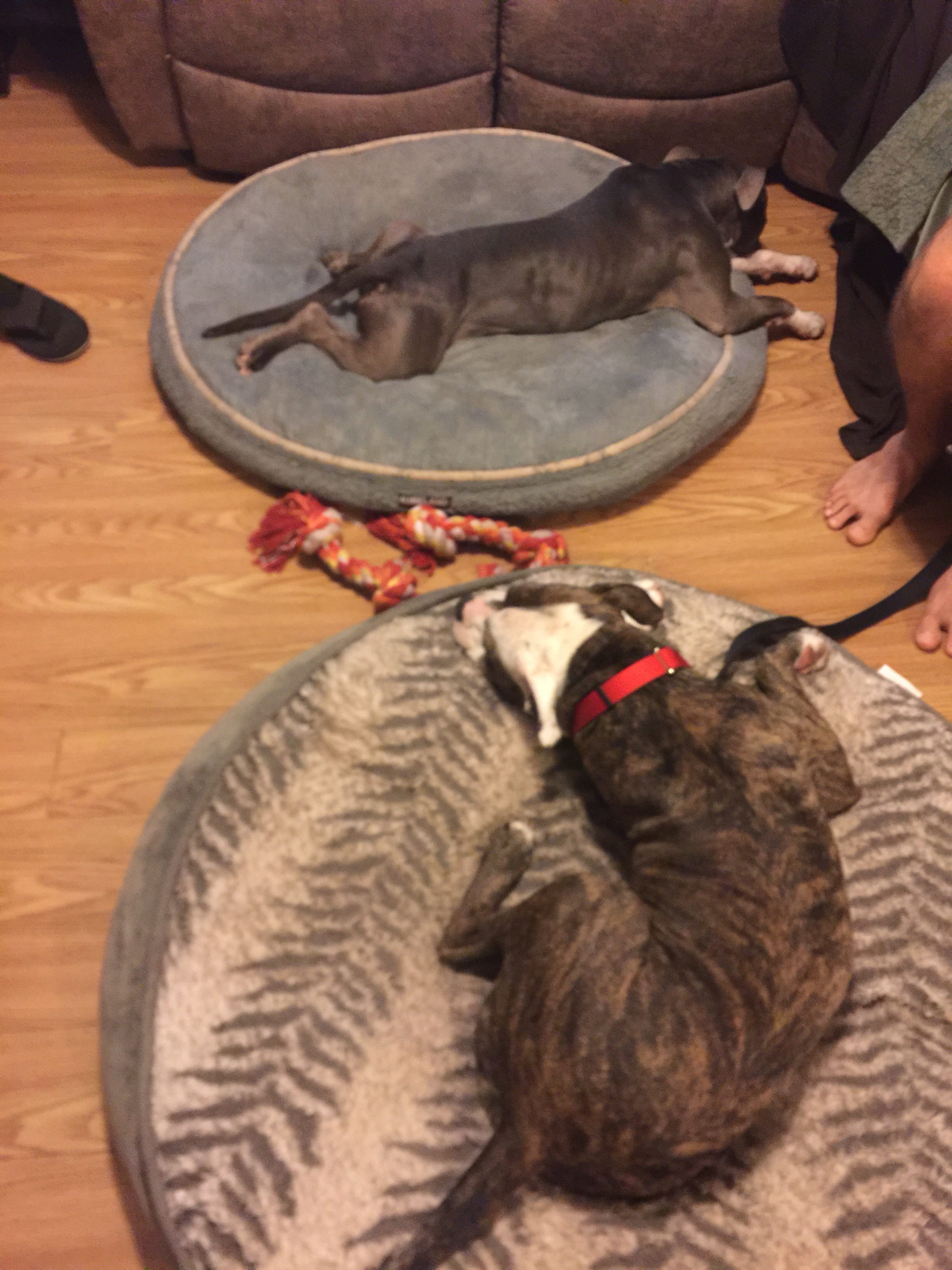 Bear would do great with a family that loves to hike, bicycle, run, skip, hop, or pretty much do anything outdoors. After you’ve guys work up a sweat burning those calories he would LOVE to curl up and snuggle! If you’re interested in Bear please contact us.

For the past few weeks Bear has been working with dog trainer, Jason King from Diamond dogs in the Ruff, to get him better at meeting new dogs. He has a tendency to come on way too strong and give the impression of aggression. We both agree that he is not ‘aggressive’, but simply doesn’t know how to do the normal doggy sniff and introduction. Instead he just barrels them over, which no one really likes. As you’ve seen from some of our video’s and pictures, Bear is out with our four personal dogs all the time. He plays with them and there aren’t any issues. He has been making progress with training; however, after consulting with Jason we agreed that he is not ready for a public event. We firmly believe that safety comes first for all parties and so we want to continue his training. Hopefully, he will be ready for the next one.

We are working with Bear on basic manners, but this takes time. Since we think he is a young dog we don’t think he was ever taught these during his puppy years.

If you would like to donate to his training please go to https://savingcyrus.org/donate/

Yesterday Bear had his first training session with Jason from Diamond Dogs in the Ruff. Bear is very friendly with our dogs, but he had months to get used to them in our house before actually meeting them directly. Since we are trying to get Bear out in the public we have noticed that he comes on a bit too strong when meeting new dogs. This is a bit of a problem since he is going to more dog friendly events. We want to ensure all the dog’s safety and we know trainer, Jason King, has the expertise and experience to help us work on that. Bear and Anthony learned some basic commands that will help reinforce a positive greeting with other mutts. We are going to continue weekly training sessions to make sure Bear is in tip top shape when getting into a new home. 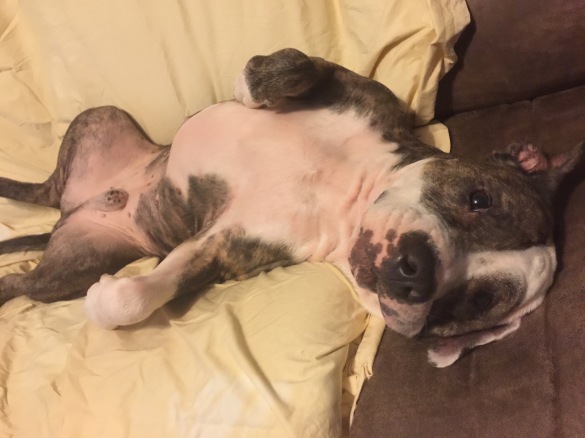 We have updated Bear’s flyer to show that he is able to be adopted into a house with other large dogs. He has made so many great strides over the last few months. He goes on runs a few times a week and plays for hours on end with all our other mutts. He hasn’t displayed ANY aggression since we integrated him into the pack. We are so happy this boy is able to enjoy the company of other pups his size. Please share Bear’s flyer. You may be the one to help find him a home. If you would like to meet Bear please email or text Melanie at 407-324-6922 and savingcyrusinc@gmail.com. 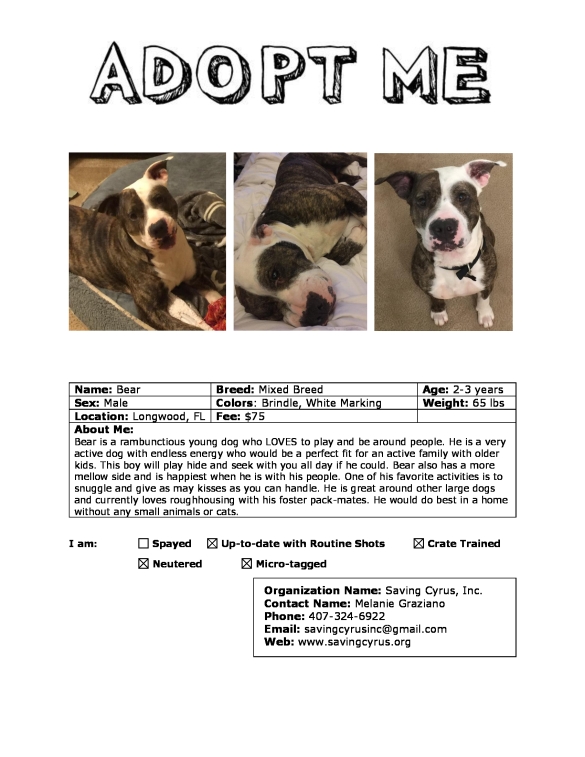 Bear has made such amazing progress in the last few weeks!

Previously, we thought he did have some dog aggression. He normally comes on extremely strong to new dogs by lunging and encroaching their space and he doesn’t listen at all to verbal or physical queues from the other dog. After the other dog gets irritated enough and nips it turns into a scuffle. After observing him the last few weeks we realized he is just behaving like a puppy.

Although he hadn’t directly interacted with our personal dogs he has at least been around them through sight and smell. Fully introducing him to them one by one has gone very well. Now we are letting him out with our pack and we hope to have him fully integrated soon. He has started to understand warning growls and has even started taking the submissive role in some mild play. It helps tremendously that we can finally exercise him. If you’re interested in adopting Bear please fill out an application on our Get Involved page. 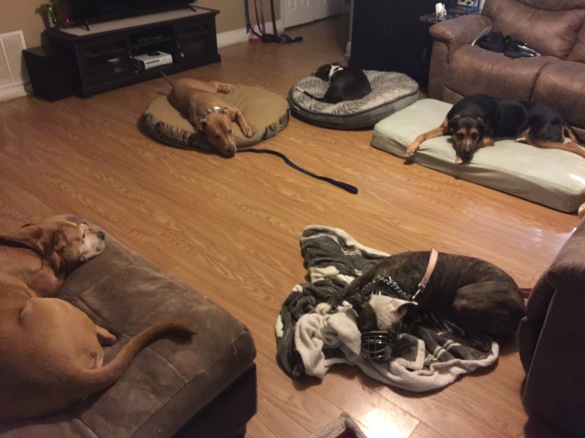 Now that Bear is off his heart-worm treatments he has been able to start being a real dog. He is in perfect health other than a mild skin infection. He is getting daily exercise, muzzle training (he is dog aggressive), and a slow introduction to our other mutts. So far he is doing fantastic! He loves his walks and is doing pretty well on a leash. He finally got to fully meet our dog, Banner last nite and it was relatively uneventful, which is always a good thing. We hope to get him fully integrated soon, unless we find his forever home first. If you are interested in Bear please go to Get Involved page to fill out an adoption or foster application. 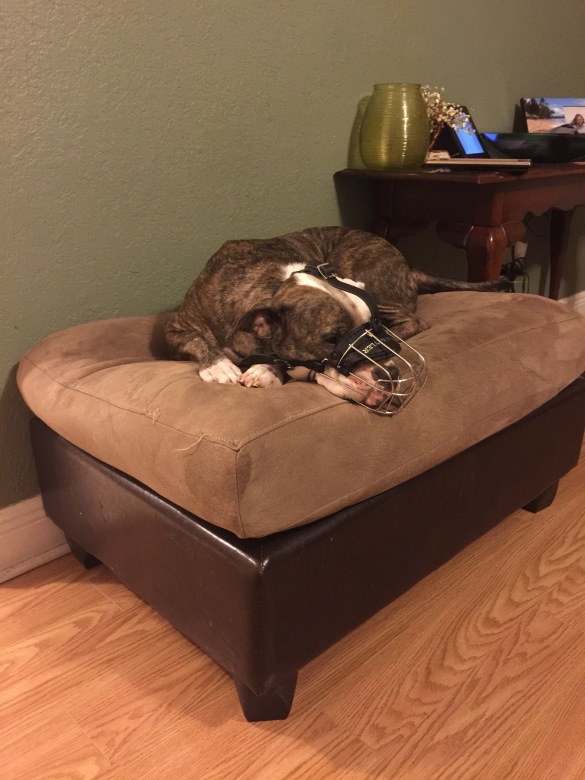 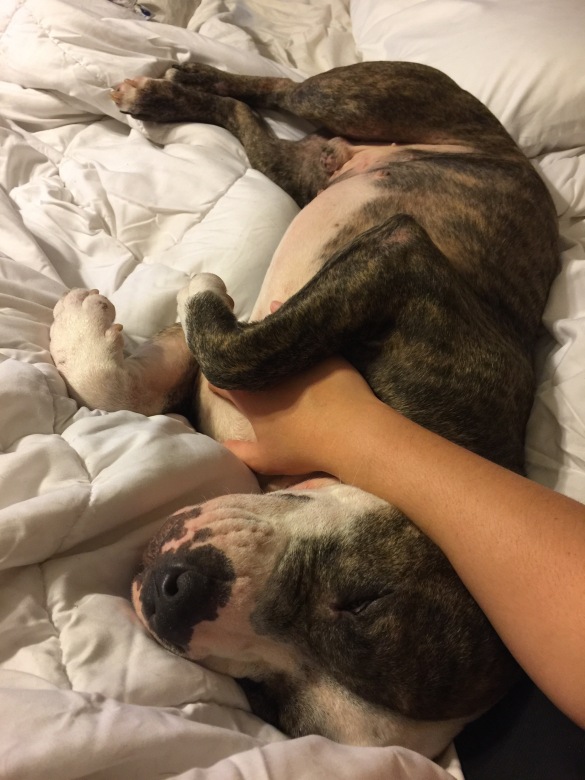 Poor Bear is having some skin inflammation and he is pretty upset with my solution. 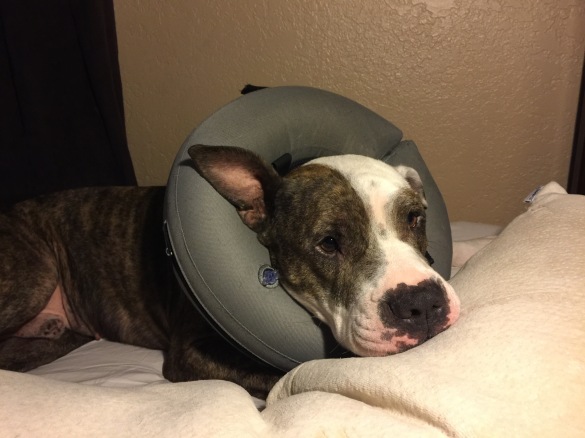