Anthony and I are both off on Sunday’s so we were excited to both spend some time with our new guy. Needless to say our other spoiled brats were jealous. Anthony’s mom came by to meet him and brought us breakfast and dinner. She knew we were going to be busy with our new ‘child’.

It was pretty uneventful. We decided we were going to have to shove the pills down his throat because he refused to take it any other way. It hurt me to do this to him, but it’s obviously needed. He ate, paced and paced and paced some more, and then passed out. We were originally going to wait to introduce any of our other dogs until Cyrus was healthier. However, we agreed that it might be beneficial to introduce him to our other dog Roxy. She is the best behaved around new dogs and is predictable. We thought maybe the presence of another dog that would lie down and relax would do him some good. To be safe we put a muzzle on Cyrus and introduced them. Again, pretty uneventful. Cyrus sniffed her and acknowledged her, but very little else. He did stop pacing for a few minutes though and we got extremely hopeful. Then he started back up.

We were concerned because although he was eating so well and keeping it down, he was also burning all those calories. How was he ever going to gain weight with this routine? 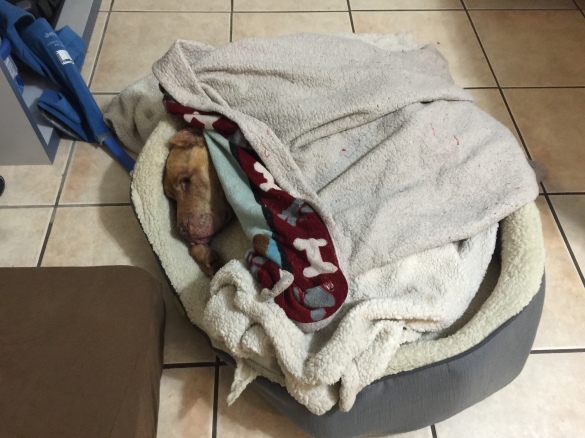